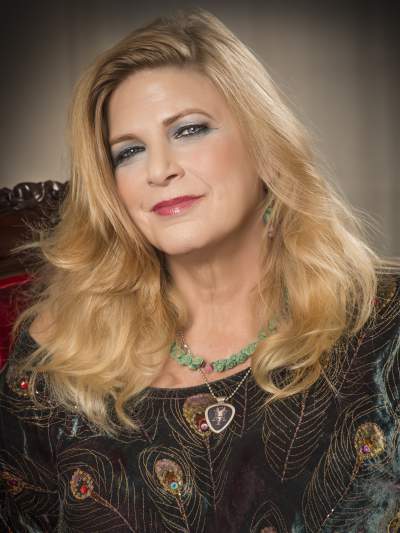 The dream continues for legendary A & R dream-maker

As one of the rock industry’s leading A & R representatives, Vicky Hamilton has seen and done a lot in a career spanning four decades, and she’s still going strong as she approaches a milestone birthday next year.

Turning unsigned acts into household names was something she could but dream of when she left her home in Fort Wayne, Indiana, for the sex, drugs, and rock n’ roll of Hollywood’s Sunset Strip in the early eighties, but do she did and in some style.

From the moment a then unknown Axl Rose called her out of the blue to become the first manager of the now legendary Guns N’ Roses, through that of Motley Crue, Poison, Stryper, and Faster Pussycat, tand now on to modern day stars in the making of Love Past Blue, Diana Meyer, Ray Goren, and London’s Matt Adey, Vicky has seen and done it all.

She even set up a label to put together the eventual, Grammy Award winning, ‘Press On’ record by ‘the first lady of country,’ June Carter Cash, whom she worked with between 1997 and 2003, a period which, considering all she has done in the music industry, is her greatest achievement.

“I just fall in love with the potential of music, it’s such an amazing feeling when you know you have helped people reach their goals, sometimes I am moved to tears of joy for them,” said Vicky.

“June Carter Cash used to say every day when we would go to work “Let’s go make a little history,” sometimes we do just that.

“I have led an interesting life with a lot of ups and downs.

“Not all endings are happy; no rain, no rainbows.

“The fame is a mixed bag, but the joy of knowing in your heart that you helped make musical history; that means something.”

With a number of iconic venues to choose from for any of her acts to perform, Vicky is constantly aware, forever on the ground, her ears firmly attuned to the sound of the beat, looking for the next, unsigned diamond to follow in the paths of the greats.

Her current stable is a strong one as well, and they know it, rock band Love Past Blue are mere youths in the grand scheme of things but are becoming experienced and knowledgeable as time progresses, and it’s only a matter of time before the mould is broken.

For Vicky though it’s not all about Sunset Strip, adding: “The strip isn’t the coolest place to play in LA anymore, I prefer to go to Silverlake, Echo Park and Highland Park to look at new acts.

“There are some great new bands springing up out of that scene and I’m not as angry as I was in the 80’s so I’m more about singer/songwriters than metal, but I still love to rock!

The initial release of her life story, ‘Appetite for Dysfunction,’ is a culmination of an impressive resume of work that has certainly witnessed its fair share of loves, successes and understandable troubles in equal measure, but laid bare all the same.

“I had been planning to write a book since the late eighties,” explained Vicky on penning her story.

“I started to write the book nearly ten years ago. I decided to start writing it as I was getting a bit older and the memories were starting to fade.

“I’ve wrestled many of my past demons to the ground and have begun to forgive things that happened. I realize I can only do the best I can in any current minute, there is no changing the past.

“All I can do is try and live one day at a time.

“Personally it has let me forgive the past and also have pride in the work I have accomplished.

“I’m no longer terrified of public speaking. Professionally it has given me a really good calling card. I’m getting more opportunities.”

And her current flock, most of whom will be ascending on NYC in mid-October, big futures await.

“Diana Meyer is working on new music and I am waiting to hear what she wants to do next,” said Vicky.

“Ray Goren is playing a lot of shows, is touring and about to release a new record.

“Love Past Blue are finishing up a new record with producer Sylvia Massey so who knows, maybe you will see us all in the UK very soon.

“I have just started consulting Matt Adey from London, a great singer-songwriter; he is coming Stateside in October.”

Autographed copies of ‘Appetite for Dysfunction’ are available from www.vickyhamilton.com whilst it is also available from Amazon and Barnes and Noble; the updated version is scheduled for release mid-October at the Cutting Rooms, New York for a few special nights with her acts Love Past Blue, Matt Adey, Damian Sage and Ron English plus guests.