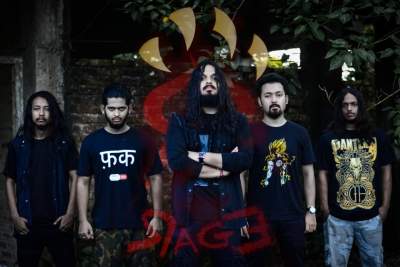 Rage is an Experimental Metal based in Jorhat and Guwahati, Assam. As of now, Rage consists of Suraj Kashyap on vocals, Animesh Bezbaruah on lead guitars, Debasish Kalita on drums, Anirban Gogoi on keyboards and Fanuru Langdon Gogoi on bass. Rage has a wide range of influences starting from progressive/technical metal to groove/thrash metal to heavy/power metal to a touch of a few extreme metal elements to classic/hard/melodic rock to other elements like carnatic, blues, funk, soul etc. Each member has his own influence and when they jam, all the influences pour in together in the form of a blended product when it comes to making their originals. Rage was formed in the year 2016 and since then, they have been highly active in the state metal circuit participating in different gigs and competitions throughout the state along with winning a few awards and making new materials with time. Rage focuses more on making original materials rather than covers and  their music is mainly based on the formula of blending opposite and totally different sounds into one so as to make it a recipe worth tasting for the listener. Lyrically, Rage talks about things both abstract and real from the most unique philosophical viewpoint that is possible. As of now, Rage has released their debut single called ‘The Sado Renaissance’ and one more single is on the way to be released very soon. The dream initially is to make a full length album with 8-10 songs within the next few years and songwriting and compositions for the new materials for the album are in process,with a few originals composed, written and performed quite a number of times in various gigs already.