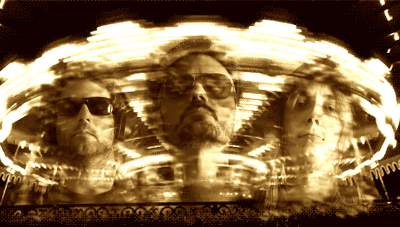 After years of playing to tough crowds in the Australian metal scene with Melbourne’s Chaos Theory, and also growing up listening to the awe inspiring talent coming out of Europe, guitarist John Emslie made a bold move and took off 10,000 miles over the sea to Helsinki to follow his calling in music.

Not knowing a soul in town he began playing in a cover band and working in cocktail bars to pay the rent, before joining a couple of local original acts (Naked Idol, Bedeng). After a period of not feeling a true creative match he decided to start something new. A fellow wayward soul from Australia, Jon Lawless, whom he had developed a friendship with after working in bars together, turned out to be quite the skin-beater and was up for the challenge. They soon teamed up with local Finnish bass master Janne Mikkola (Graveborne, Terveeltä Pohjalta) who happened to share their musical vision. The vision was to create heavy music from the heart without conforming to any re-hashed sub-genres within rock/metal music. To make listeners think for themselves rather than be puppets of propaganda for worldly agendas.

Although some have stood in to help out along the way, they have struggled to find another like-minded musician to fulfil the slot on vocals, so John has been main man on the mic also. For better or worse he has a raw, aggressive voice that will never surrender to autotune and delivers lyrics that etch themselves into your mind for good.

With utter disregard for what is popular, accepted or even correct, momentum has been slowly gaining for this little northern gem. They hope you have as much fun listening to their quirky tunes and and twisted tales as they did creating them.

Music from Happily Ever Blind