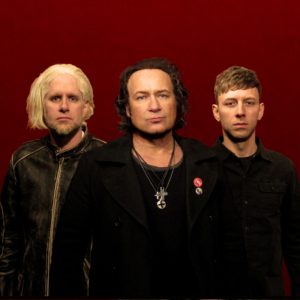 WHY recorded their first album “THE NAKED SOUL”(see discography below), and followed it with 2001’s “THE RISE AND FALL OF THE QUESTION MARK”, which drew fans and critics alike to their energy-fueled live shows.

WHY where just invited by Bono‘s organization ONE, to film a performance of a iconic Protest Song to be part of Bono‘s brainchild Agit8 for the G8 to draw attention to extreme poverty. WHY covered The Stones “Gimme Shelter” and invited beloved Winnipeg R&B singer FLO to join the rooftop performance. WHY‘s performance is featured on ONE.org international site. WHY were the only Canadian rock band asked to participate.  Other artists involved : MUSE, U2, Macklemore & Ryan Lewis, GREEN DAY, Tom Morello, Sting, MUMFORD AND SONS, Elvis Costello, One Direction, AEROSMITH, USHER, Will-Iam…

WHY – The Leap (CDBABY ARTWORK)

2013 WHY released their 5th album “The Leap” available on CDBABY www.cdbaby.com/cd/why6  and iTunes. See the official video for  WHY – “Weep” official video: http://youtu.be/W3Rs8b8SdVQ

June 1st 2017 WHY released “Repair The Breach” the 1st single from their forthcoming 6th album.