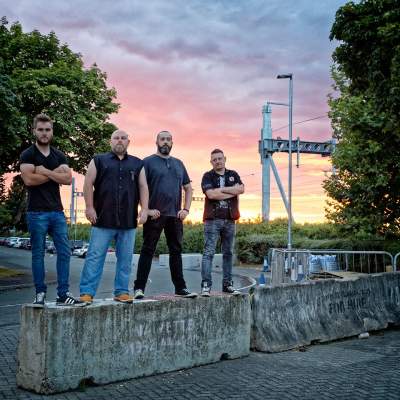 The Darker my Horizon

UK based ‘The Darker my Horizon’ was formed late 2014 by former ‘Sacred Heart’ duo: frontman Paul Stead & guitarist Mark Stephenson – who wasted no time in starting the recording of debut album “Acquiesce” – which was released to much acclaim in March the following year. That was followed by 2016’s equally well-received “No Superhero” (through Broken Road Records).

These are on top of headline and festival appearances (with the likes of ‘Stone Broken’, ‘Skarlett Riot’, ‘Chasing Dragons’ ‘Saints Of Sin’, ‘Neuronspoiler’ and ‘Dirty Thrills’) all over the UK – including main stage at the world’s biggest event of it’s kind ‘The Great Dorset Steam Fair’ and top billing at Rox Festival (Bognor UK).

2017 also saw the first international dates – including a show in Czech Republic at the flagship/largest Hard Rock Cafe in Europe (Prague).

The current line up is completed by former ‘Lost Patrol’ drummer Will Knox.

And on the bass guitar, another former ‘Sacred Heart’ member, Paul Hamilton – who’s passion and enthusiasm adds to the fun live experience.

The Darker my Horizon online

Music from The Darker my Horizon