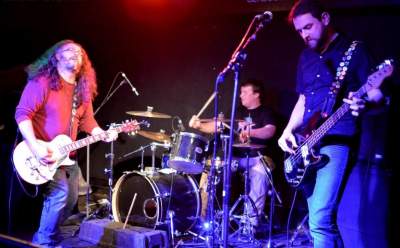 They have released Five albums:

Other notables: Overhaul’s second album Hope Shines Through was one of the last albums to be recorded at Glasgow’s Cava Sounds Studio one. Studio one was later torn down and made into car parking. Cava is still going strong, in fact Overhaul recorded part of the Achukma album there.

Original drummer and one of the founding members of Violent Femmes Victor DeLorenzo co-produced and played drums/percussion, backing vocals and Theremin on Overhaul’s third album Here and There.

Achukma originally started as an Andy Gallagher solo EP which was released on After Music Recordings in Minneapolis but Andy thought the songs were so good, he took the tracks and continued to produce and add to them. Gordon Gano (Violent Femmes), Mike Watt (Minutemen/Iggy and The Stooges), Astrid Young (Neil Young) and many others performed on the album.