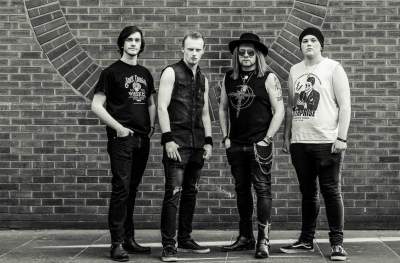 We are Neon Hurricane! an Alternative Rock band from Glasgow!”
Formed in 2016, and through a series of changes such music and line-up, are now pleased to introduce fans to the new and improved storm that is NEON HURRICANE!
Made up of 4 dreamers from Scotland, Neon Hurricane is aiming to go the whole way with their music. With a catalogue of impressive, unique songs under their belt and dreams being one of the biggest players in the Alt Rock scene, the band are constantly working hard in the studio and on the road to ensure this becomes a reality.
With thousands of hours airplay both in the US and throughout EUROPE, the band are constantly pushing the music and themselves to the limit, to produce a polish, perfected and unique sound.
As a band, Neon Hurricane have played several high-profile gigs and festivals all over the UK including opening for Alice Cooper and being featured on the Firestone Stage at Arena Birmingham. After a successful 2018 full of festivals, new recordings and new experiences, 2019 promises to be nothing short of spectacular with a new EP called Imperium that was released at the start of Q2 on all major streaming platforms.