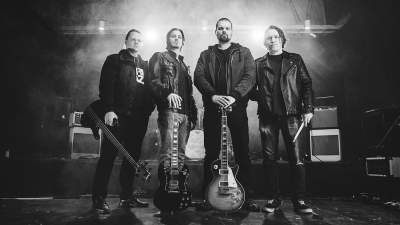 Blackbird Sons is a four-piece band founded in 2016. This group plays straight
forward ”slap in the face” rock ’n’ roll music where the riffs and the groove make
homage to the traditions of blues rock.
In their music you can hear influences by AC/DC, The Who and ZZ-Top.
Despite the strong influences, they have their own unique Blackbird Sons sound.

Blackbird Sons released their self-published debut EP ”Back In The Game” in
October 2017.
This release has been praised by fans and radio hosts.

First single and the title track “Rock ‘n’ Roll Ain’t Dead” was released on March
1st with a music video.

“We want the people to hear that rock music is still alive and kicking and it’s full
of that “raw and rebellious” energy. We wanted to do a song that would make
you want to tap your feet, bang your head, raise your hands and shout “Rock ‘n’
Roll Ain’t Dead!
This is our first single and the title track from our upcoming 5 track EP, which will
be released in April 2019.”
Although the band enjoys working in the studio, they are known for their energetic and entertaining live shows. In other words we are talking about a live band which live shows you don’t want to miss out!